Schedule a Demo with our team.

The Importance of Autonomous Manufacturing Amid the COVID-19 Outbreak 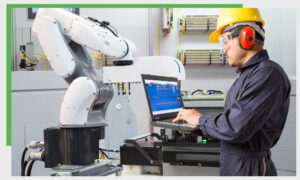 All manufacturers are adjusting to the new normal and with “Social Distancing” in full swing companies are making more aggressive investments in technology to achieve autonomous manufacturing.

This approach accomplishes a couple of important objectives; one, it alleviates the demands on human intelligence for SMART Factories to operate, and two, it improves the overall efficiency of operations.

The Role of Artificial Intelligence in SMART Factories

Continuous manufacturing operations are like commercial jet-engines; they operate 24X7X365 and so things like machine down-time and the efficient use of assets are critical for success.

Now more than ever, companies need to take advantage of the benefits that new technologies can deliver to their businesses.

“AI applications boil down to doing more with less and eliminating human errors in manufacturing processes.”

Higher levels of automation including robotics, IoT and AI, are the new technologies helping to deliver orders on time with less reliance on human intervention.

These new investments are changing the way companies think about how they engage their customers, empower their employees, and optimize their operations.

Most manufacturing businesses have already made investments in SCADA systems, IoT devices and robotics, but to realize the full potential of those investments they need to put the data they are collecting to work.  This is where Artificial Intelligence comes in.

Initially, AI in smart machines was used to make recommendations about repetitive manual tasks that operators would perform.  Significant advancements have been made, and the shift from assisted intelligence has transformed into autonomous intelligence where machines are making recommendations that humans now trust.

Turnkey AI platforms are now closing the loop between their recommendation engines and PLC systems so that operators don’t have to act on those recommendations leaving them to focus on more mission-critical tasks.  It boils down to doing more with less and eliminating human errors in the manufacturing process.

SMART Machines On the Shop Floor Now a Reality

The use of big data and AI will continue to drive operational benefits in all areas of operations, such as more efficient usage of raw materials, lower energy usage, and improved product quality.  With the right foundations in place and with access to the right data manufacturers will see AI make informed decisions at each stage in the production process in real-time.

As AI adoption becomes more mainstream, manufacturers stand to save millions and disruptors stand to gain the most from these new advancements.  Be a disrupter and get on board with AI for manufacturing now. Laggards will forever be playing catch-up and worse yet lose ground to their competitors.

Discuss the details with our team.